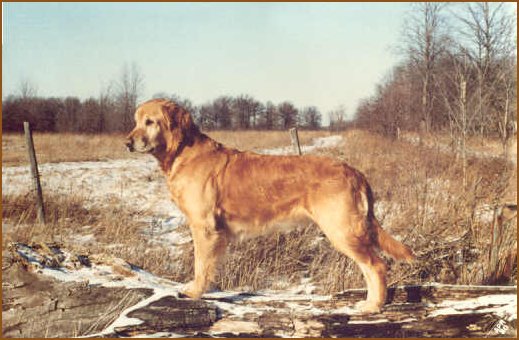 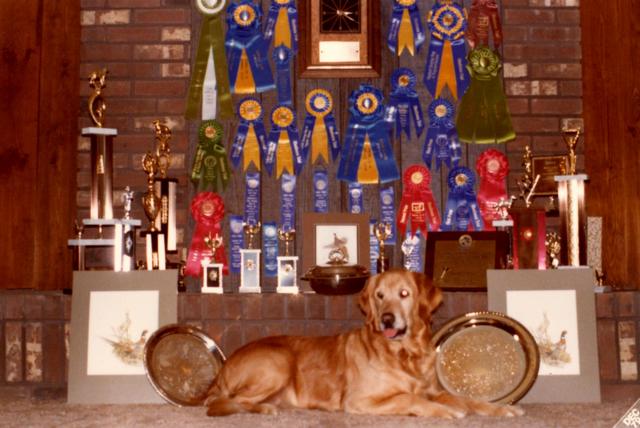 pedigree link
Findings of 2007 Research studies for Golden Retrievers:
Abbey is still rated one of the top 3 female Golden Retrievers to have produced nine Obedience Trial Champion offspring; and is the only female with her listed titles of American Canadian Obedience Trial Champion, Tracking Dog and WCX. Abbey is also rated #2 in production of Obedience Utility Titled offspring.Follow this link for more info:www.undeniablegoldens.com/GoldenStudiesLink.html

Daughter of the well known, and probably one of the top producers of obedience Golden Retrievers in the history of the breed, Am-Can Ch Bardfield Boomer UDT, WC, Can UDTX, “Abbey” made it possible for me to achieve more than I ever imagined.  She taught me about dog training to a higher level, along with setting goals, problem solving, patience, humility, but most importantly … love and devotion, I never thought possible.

“Abbey” became the foundation dam for Wynwood Golden Retrievers.  She introduced me to the vast community of dog trainer’s and her own list of achievement’s is long and impressive

To this date, “Abbey” is still the only dog to win First Place four years in a row at the Detroit/Windsor World Series of Dog Obedience Competition.  In 1980 she won the Super Dog Division, 8 weeks after delivering puppies.