Wynwood The Right One 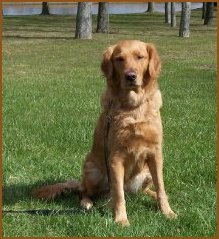 In July of 2011 Lacy was recognized by the Golden Retriever Club of America as an Outstanding Dam. This achievement required that Lacy produce exceptional offspring that achieved AKC & GRCA recognized working titles.  Congratulations to Lacy……we always knew she was ‘Outstanding’!!
Pedigree Link

“Lacy” was born at Wynwood on 1/29/02 out of Can Ch Comstock’s Iceman SH, WCX “Ice” and Glenbrooks Grady Girl “Grady”. She has been a great addition to the Wynwood Breeding Program and has produced three litters so far.

At her first breeding season, in September 2003, she was leased to Paws With A Cause for a litter of puppies to be trained as Assistance Dogs. Paws With A Cause is non-profit organization training dogs for people with disabilities. PAWS is located just south of Grand Rapids, MI.

Out of that first litter of 7 puppies, sired by Can Ch Noblewood Bound For Glory, 3 pups became Service Dogs, one pup became a Social Support Dog. Rufus became a Seizure Response Dog. Reese became a Service Dog/Guide Dog/Seizure Response Dog and it is very rare that one dog has the ability to be able to work in all of these area’s of Assistance Dog work. Good Boy, Reese!! Wynwood is very proud of all of you, your mom, Lacy and dad Burner too!!

Lacy has proven herself to be a wonderful producer with many multi-talented offspring, scroll below to read about some of her talented babies.

In June of 2004 Lacy was bred to “Raptor” HRCH Hightimes Lorfld Birstheword MH WCX, which produced 9 puppies. The first litter was such a nice group of puppies, we decided to repeat the breeding to Raptor and Lacy produced 8 puppies in October 2006.

PHOTOS OF SOME OF LACY’S OFFSPRING: